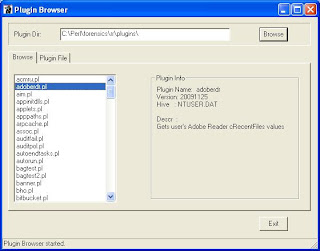 One of the things I've noticed since I first released the tools with RegRipper was that I thought I had a great idea by providing functionality in rip.pl/.exe to create a list of plugins with details, including which hive each plugin is intended for, the version, etc. In fact, I included the ability to create a listing of plugins in .csv format, so you could open the list in Excel.

To do this, you'd use the command line:

However, I don't think that this really caught on. Over the past year or so, I've received requests for plugins that are already part of the currently available distribution.

However, the current version of rip.pl (i.e., released with RegRipper v.2.02) relies on the fact that the plugins directory (i.e., the directory where you keep your plugins) is set and stagnant, and that you don't change it. In the new version of RegRipper, I'm supporting a user-configurable plugin directory setting.

So this is a neat little tool that came out of my work with some different UI things I have been working with and trying lately. In putting together some of the new RegRipper tools, I wanted to have something of an updated user interface; I'm programming the UI using Win32::GUI. The Plugin Browser tool came out of the desire to try some of the things I found, as well as just wanting to have something a little different.

Addendum: Based on Adam's comment to the initial post, I updated the tool to include the ability to create plugins files. As you can see in the second image, I added tabs to the UI, one of which allows you to select plugins from the list on the left, add them to the list on the right, and then click the Save button (notice the tooltip for that button visible in the image). As the plugins file will be using plugins from a particular directory, the plugins file will be saved in that directory...otherwise, the RegRipper tools won't know where to go to get the actual plugins! 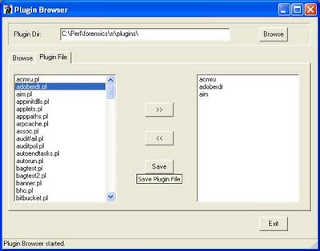 One of the cool things about this is that as you're building your plugins file, you can go back and forth between the Browse and Plugin File tabs, looking at what hive the plugin is for and what it extracts, then adding it to your plugins file.

Once you save the plugins file, the content of the listbox on the right will be cleared.

A suggestion for additional functionality in the plugin browser would be to allow the user to select a subset of plugins to create a new plugin file. I know it is easy to just type up a plugin file in a text editor, but if you are already browsing the plugins via a GUI it would be nice to just hit an ">" button and have them added to a list that could be saved out as a plugin file.

That's interesting. To be honest, I hadn't considered that...it wasn't something folks had asked for. Ever.

Also, I think it may be just a bit too much functionality for most folks. I've included detailed instructions with some of the tools, including ripXP, and I've found that some folks (a) don't read them, and (b) don't bother to ask why things aren't working. ;-(

Harlan, I like this a lot. Making you own custom plugin files from the available set, very cool. When will it be available?

You've always been able to make your own custom plugins. Simply run:

Open the resulting .csv file in Excel, sort based on hive file, and then create your own plugins file with Notepad.

Your new plugin creation tool is brilliant! I know you're scratching your head thinking, "Why is this such a big deal? You've always been able to create custom plug ins and it was never any harder than using notepad!"

True, but we are a lazy, ignorant bunch sometimes; so, something that makes the easy effortless is just so...all American! Thanks.